Tough Mudder: Its muddy but is it tough?

Tough Mudder: Its muddy but is it tough?

Just for fun I participated in the Central Florida Tough Mudder in Nov 2016.  I used to run every day, participate in 5K and 10K races and train with a club organized by a former Olympic trials qualifier in New England, but that was right after high school.  He had his own running shoe store where we would meet and when we all set out for our run we knew he would be holding back for the rest of us.  I was the youngest but I was taught that if you wanted to improve you had to train with people better than you.  At that point the furthest I had run with the club was approximately a half marathon.  This Tough Mudder would be 11 miles.  I trained by running on the treadmill at the gym up to ten miles which took quite some time since I don’t run 5 minute miles anymore, at least for any distance.  Even so, it didn’t prepare me.  This I was to find out later on the day of the event. 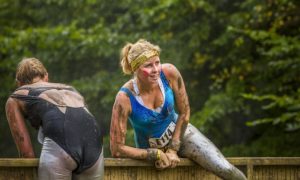 I would deconstruct the event into two parts.  The obstacles and the running although there is a component of teamwork involved, even if you were running by yourself as I was.  There were a couple of challenges you simply could not accomplish without help.  However, for me the obstacles, although challenging, weren’t the most difficult or time consuming part, it was the running.  That was the tough part of the course and the reason for this is: Terrain.  Although, the course was on a undeveloped subdivision with un-maintained paved roads and grass fields it still was not completely flat like the road your house is on or a treadmill.  Why is this important?  The answer is: your knees, or at least the knees of most of the participants who have not trained on this type of surface including myself.  The last time I ran cross country was in High School.  Your knees took a beating and I could hear people around me saying the same thing. One guy said to his teammate”If I stop my knees will stiffen up”, a gal I overtook was walking and was practically in tears from the pain telling her teammates “my knees are in so much pain.”  Mine were also in tremendous pain and this had slowed me to a walk through much of the course, but I ran where I could.  I was getting concerned that I had torn something and might have permanent damage but was somewhat relieved when I learned that I was not the only one in discomfort.  Soldier on. 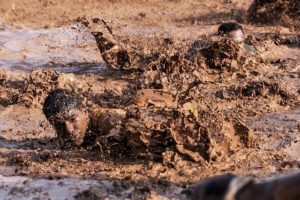 The obstacles were challenging and included mostly going over things using pegs, ropes and other participants; under things such a wire fence a few inches above the water, bags full of water suspended over mud, a partition in a box full of ice water, and netting; and through things like tubes, hanging electrified wires, and course lots of mud pits.  There was also the buddy carry for 50 yards.

Where my original estimate to finish was tacking some time onto my gym runs for the obstacles the reality was different due to the knee pain and also something else I had not anticipated: waiting in line.  The course was being run over the weekend and I chose Sunday fortunately, since I heard later that the Saturday run was significantly more crowded, which meant more waiting for others at the different obstacles, driving the finishing times even higher.  Where it took me a little over two hours to run 10 miles in the gym this took closer to five hours.

Despite these factors I am still glad that I participated.  It’s the type of challenge I enjoy doing and training for and would do it again.  There are other mud runs out there throughout the year so another one is always possible.

This returns us to the original question of the post:  Is it tough?  I would say yes, even though I completed all obstacles but one, where my grip gave out traversing overhead bars, it is physically challenging but also transformational both during and after the event.  As  you complete each section you become mentally stronger for whatever they have for you next even if you are tired. This was my experience.  At the finish line was a platform where you slid down (under a wire fence a few inches above your body) into a large vat of ice water, then proceed to sink into thousands of ice cubes to go under a wall and emerge to pull yourself out of the vat then onto the finish line.  Typically this would be a challenge for most people if they were to do it by itself, but after experiencing climbing over walls, crawling through and falling into mud, navigating through narrow tubes, and climbing over people, it was just another test to overcome.  After the event there was a satisfaction that, if you needed to, you can overcome some rather rugged and demanding circumstances that may come your way.

The coup de grace is making you run through electrified wires hanging over water to remind you with every shock that you chose to voluntarily do this to yourself.  Once done, they offer you a congratulations, a shower, a free beer, a goodie bag, and a Tough Mudder branded athletic shirt and headband.  Was that worth several hours of pushing myself to my mental and physical limit?  Absolutely, either this is what makes you tick or it doesn’t.  I would have done it for free.